Peter Walters presents the magnificent Andrew Butt, composer and saxophonist, with the beautiful support of Paul Henderson on guitar, Paul Hudson on drums and Peter on bass. Doors, food & drinks from 6.30pm.

THE ARTIST: Andrew Butt - Churchill Fellowship recipient and fixture on the Australian jazz scene, Andrew has graced the stages of jazz festivals and clubs around Australia and Europe, playing his crafted eclectic and personalised compositions on both tenor and soprano saxes. Date Saturday 8 October 2022 7:00 PM - 10:00 PM (UTC+10) Location Get directions

The music is engaging and entertaining for wallflowers and hip-shakers alike. The constant push and pull between powerful percussion and stunning melodies creates a dynamic tension that draws you in and invites you to move.

What the media are saying: ‘during the band’s second set, people swept onto the floor in droves to dance to the live music. It was a spectacle to see a crowded dance floor with everyone facing the band, and seemingly through intuition, waving their arms and clapping in unison on various beats in the bar, as if my osmosis. It was a tribal experience, and very hip.’ Eric Myers, Jazz writer for the Australian, Dec 3rd, 2021 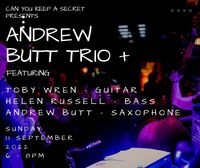 Award winning originals and jazz standards in one of Brisbane's best live rooms. Join Andrew Butt– saxophone, Toby Wren - guitar & Helen Russell–bass exploring their favourite tunes in the magical space of Woolloongabba’s “Can You Keep a Secret”. CYKAS is a retro-themed wine bar and lounge with a secret vintage boutique, housed in a very special historic building. Sunday September 11, Two sets from 6PM.

The Francis Wolves are back.

No one does a Sunday Matinee quite like the Francis Wolves.

Back Once again in Kurilpa, West End in your new favourite venue "It's Still A Secret"

Hailing from Brisbane, Australia, The Francis Wolves deliver a sound that Triple J’s Dom Alessio refers to as ‘the soundtrack to big wave surfing…in hell’. An instrumental funk juggernaut that brings together a melting pot of genres. It’s a fuzzed out wall-of-sound with ferocious horns and a brooding rhythm section. There’s ominous organ and infectious congas. It’s a hot mess. A funky hot mess.

Their most recent second album, recorded in Brisbane and mastered in Hamburg, Germany by Fabian Tormin (Biffy Clyro, The Kills, Kurt Vile, Lee Ranaldo) delves deeper into more dark and ominous territory than their debut managed. It’s a more mature offering from the Francis Wolves pulling no punches musically.

Among the 10 tracks, they pay homage to one of the greatest composers of all time, Ennio Morricone – who passed away during the recording of the album – in “The Ballad of Lee Van Cleef”. It’s a cinematic underscore for today’s spaghetti western complete with timpani drums, theremin and an unhinged guitar solo. The shades on this record are deeper and darker. From the brooding, Fender Rhodes driven “199 to Brunswick” to the MC5 influenced “Brother Wayne Kramer” the record tells a story of hardship, grit and determination…and it does so, without any words.

So get on board and get yourself to the dancefloor. You won’t regret it.

It's The Francis Wolves

Directing Marist College Ashgrove Brisbane. Jumpers and Jazz in July brings together a program of over 100 event experiences across the region during the ten days of the festival. The program is bookended by two big weekends of celebrations providing plenty of opportunities to make a weekend of it. Or avoid the crowds and take advantage of the festival's mid-week offerings. 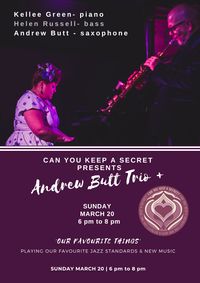 Join Andrew Butt– saxophone, Kellee Green–piano & Helen Russell–bass exploring their favourite tunes in the magical space of Woolloongabba’s “Can You Keep a Secret”. CYKAS is a retro-themed wine bar and lounge with a secret vintage boutique, housed in a very special historic building.

Mike Price is an Australian jazz guitarist and music educator, graduating from Boston’s Berklee College of music, he spent 6 years playing throughout the North Eastern United States, notably with Nat Reeves, Randy Johnston and Dave Santoro. He has performed widely throughout Australia, and in this Headliners Performance, teams up with highly regarded & award winning tenor saxophonist Andrew Butt for a one-off, must-see Concert, that includes Tommy See Poy on Organ & Joe Vizzone on Drums. Presented by J.C Stylles

Looking forward to bringing another Exclusive Jazz Concert to Cairns Next Month on Friday 12 November, with a Jazz Headliners Performance from Master Guitarist & Educator Mike Price & his Special Guest-Award Winning Tenor Saxophonist Andrew Butt ! Joining them will be the Dynamic Duo of Tommy See Poy on Organ, and Joe Vizzone on drums. Get your Tickets from the below link NOW to avoid disappointment !

"Something Old, New, Borrowed and Blue" 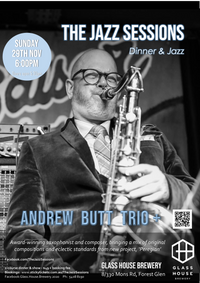 Join us for a night of great food, smooth brews and hot jazz at The Jazz Sessions! Ticket includes a two-course meal and an amazing show!

Described by ABC Jazz as a stalwart of the Australian music scene “Andrew Butt Trio +” emerges out of the COVID fog to perform a mix of originals and eclectic standards from their soon-to-be-recorded release, “Peregian”. In early 2020 Andrew performed to full houses in Paris, Budapest & Prague and in this performance makes his debut at the Glass House Brewery with some of Queensland’s most innovative and creative musicians. This group is regularly featured on radio, major venues and festivals across the world including the Wangaratta Festival of Jazz, the Brisbane International Jazz Festival, Le Baiser Salé Paris, iF Jazz Café Budapest, U Malého Glena Jazz Club Prague, Sunset – Sunside Paris, Tanks Arts Centre Cairns, Bennetts Lane Jazz Club and the Paris Cat Jazz Club Melbourne.

Andrew has been prominent on the Australian Music scene for over 25 years, being a winner and multiple finalist of the Queensland Music Awards. Other accolades include a Churchill Fellowship and performing as a jazz soloist with the Queensland Symphony Orchestra.

Performing works from their latest release "Peregian". In recent times this group has featured at the Wangaratta Jazz Festival, Brisbane International Jazz Festival and the Tanks Arts Centre Cairns. Andrew’s accolades include a Queensland Music Award, Churchill Fellowship and performing as a soloist with the Queensland Symphony Orchestra. 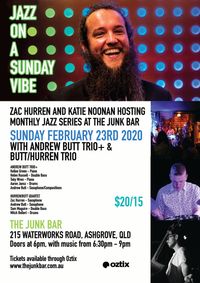